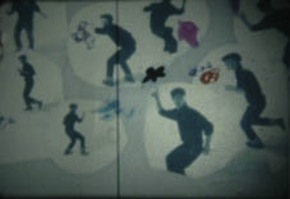 an army of leprechaun taggers

My first foray into collage animation uses low-fi techniques, such as a photocopier, to illustrate a story in limerick form. The limericks tell of a place where creativity is suppressed and all acts of resistance are covered over with white paint. It also illustrates a character who displays an open sexuality, both queer and polyamorous. The DIY aesthetic calls up notions of subversion of the dominant culture through its ues of low-tech and hand-made traces.