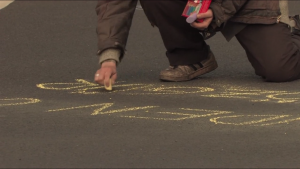 This screening investigates film and video work made by queer artists with transnational or colonized backgrounds; about language, the double meanings of words and various (mis)interpretations and clashes that can occur at the cross-sections of different cultures. Juli Saragosa, a filmmaker and curator, has curated this screening addressing concepts from post-colonial theories of the in-between, and the concept of trickster as a subversive strategy in aesthetic production.

It was presented at VIVO Media Arts, as part of the Performigrations Project on August 22nd, 2015.
More info.

A slightly different selection of work was presented at the Innovate Heritage Conference at the ZK/U on June 6th, 2014.
More info.

Language is an integral part of a people’s culture. When languages start disappearing through colonization or systemic oppression, a people’s culture becomes at risk. “In language are encapsulated not only thoughts but cultural values.”[1] The worldview of a person is exhibited through the structure of their language. It is not only indicative of the culture of a people, but is also reflective of the individual, their experiences, and all their complicated thought processes. Everyday life is a constant negotiation of contradictions.

The post-colonial theorist Homi Bhabha introduced the concept of the ‘third space’ that exists in-between languages and cultures. This is a place of translation, where (mis)understandings can occur. Trickster is an agent ‘in-between,’ in the ‘third space,’ who can act as a carrier of thoughts, ideas, and cultural values from one language or culture to another. Sometimes viewed as a translator, trickster also acts as betrayer. The Italian word for translator (traduttore), is a pun on the word for traitor (traditore). This “reminds us that the translator who connects two people always stands between them.”[2] Jean Fisher writes that trickster’s disorder is a “latent form of resistance to hegemony,” [3] meaning that the forms it uses are ones that disrupt normal production to counter a normalized worldview. Fisher posits that subjective agency is deployed through its language of trickery.