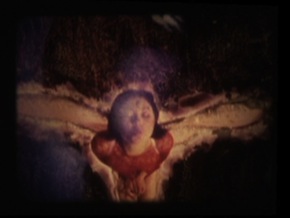 Kerry Segal as the Red Fairy 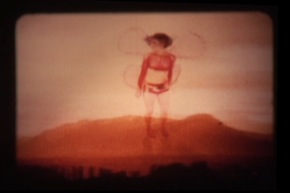 A mixed-media collage on 16mm, the layers & text contain imaginary allusions to identity fixing. On the edge of fantasy and reality, a trickster fairy guides a lonely femme home.

Project Description:
I started this film in 2002 as an exploratory piece. I wanted to experiment with different styles of filmmaking while examining my own identity within them, both as an experimental filmmaker and my evolving identity as a queer person with multiplicit identities. The film shows me as the character, changing through the past 4 years, emerging with a new character, The Pink Fairy. Part femme, part tomboy, part fairy, the characters come together to explode the idea of a fixed identity. I imprint them onto the film with my hands as a hand-made filmmaker. Using hand-processed colour footage, a luminescent imagery that only occurs in the privacy of a darkroom (or in my own mind). I optically printed super8 to 16mm, and 16mm to 16mm, printing negative onto positive, and repeating motifs, to explore the intricacies of this medium. I drew right onto the film the wings the character needed to melt away her fears. I played with digital effects and rephotographed those video images from a computer screen to layer meanings. Each process undertaken was directly linked to the symbolism of the moment – the red fairy and her being trapped in video, the pink fairy transforming from negative blues to positive pinks, etc. The symbology of fairies contain power of transformation. The same parallel process occurrs through the exploration of the film medium, as playing with techniques uncover mysteries of film magic.

The emotion contained in the audio was manipulated in an almost random fashion, like Brion Gysin’s cut-up technique of dropping bits of words on the floor to see where they land. Then recording them that way only to rearrange in editing. The music was also made in bits and pieces – the drum track improvised to an earlier picture cut, then the bass line added weeks later as I sat with it and listened and listened to it over and over again… sometimes leaving time in between in order to listen with fresh ears.

The film is a 7 minute 16mm composite print with monoaural sound. The narrative structure is layered with visceral feelings and emotes a state of mind. The story is fiction, and references my own autobiographical experience.