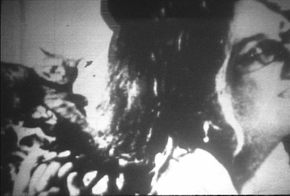 The gaze – taken into the hands of four women who craft, document and participate in a ritual dread locks removal. This super-low-budget film subtly subverts the hegemonic forms of production by optically printing miniDV, 16mm and Super 8 to hand-processed 16mm.