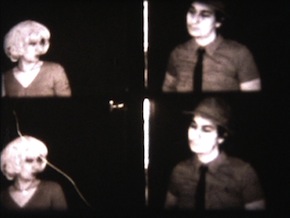 A hand-processed unsplit regular-8mm film reveals identity anxiety and the importance of reflection in learning to love oneself.

This is an installation of a 16mm film projector with mounted loop box, it can be set up in any darkened space, ie; a closet with a peephole cut into it.

Trying to love oneself through gender play, reversing action through split frame exposure, a frame line hides the kiss. This one-take film was shot on double-eight film, the film camera turned upside down as the second part was performed backwards. Then hand-processed and left unsplit. An attempt to make film as present as performance with unedited film, hand-processed to add an intimate sensibility.
This film can also be shown as a film loop with a custom-made plexiglass loopbox.